Francisco on Halloween in Capitol Hill 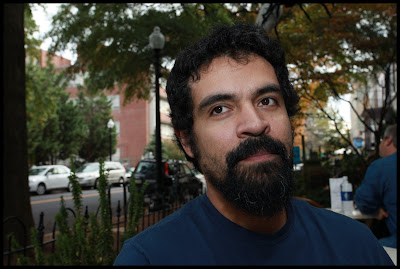 "We've been in our house on the Hill for eight years. My wife grew up around here so coming back was a nice homecoming for her. And, we are raising our kids here, too. We got a house right before, like, the market went berserk. At the time, the area was hot. There was a corner spot where kids were doing shit. Every now and then, there would be a shooting. Still, we were happy to be in the city, but we were just more alert. Especially with kids, you got to be alert. People come to DC and want it to be a small town, but it is a city. You need to behave like it is a city because shit goes down.
"Things started to change a couple of years after we moved when they closed the projects, the Kentucky Courts. It turns out that they closed it because there was an old lady who had lived there forever and one day her ceiling collapsed from all of the pigeon shit that accumulated on her roof. The city had never addressed the pigeon shit and the structural problems the shit caused. The city didn't want to deal with the lawsuits that were forthcoming so they just closed the projects and moved them. They tore that down and turned it into a mixed-income area and then the expensive houses starting going up. Houses in excess on a million dollars right next to mine.
"It's funny when you start to see the neighborhood change and people walking their dogs after nine p.m. That never happened before. In the past, that kind of person was just fucking crazy. Now, people walk around at all hours, even if they don't have dogs. Now, I see Senators living on my block. My property taxes have gone up. True, my value has gone up, but my little old house still has a lot of issues. There is no way that I could afford to sell it and move to another house on my block, things are too expensive.
"Still, I love this neighborhood and want to stay. Sadly, I know all of my old neighbors, but none of my new ones. I do know one of my new neighbors because he gives out brussels sprouts on Halloween. He's a trip. My kids are like what the hell is wrong with this guy. But, that is his thing, I guess. Halloween is crazy here now because people descend on Eastern Market and Capitol Hill. I have seen pickups from Maryland and Virginia drop off, like, eight kids here to go trick or treating. Before the neighborhood turned over, it was a real trip on Halloween. I used to get this crazy sixty-year-old woman who would knock on my door three times a night every Halloween. She was always smoking a cigarette with no kind of costume or child and sticking her bag out for candy. I mean, at least say trick or treat or put on a costume or something. Now, we get tens of thousands of kids coming here and people create these elaborate Halloween decorations and dress their houses up. It's really amazing how everything has changed so much in this neighborhood, especially Halloween."
Read more about the history of the Capitol Hill neighborhood here.
Posted by - at 9:00 AM

Professionals The [URL=http://www.northfacejacketsforsale.net/#928]north face pro deal[/URL] to give its top, most computer North Face Backpacksadvanced jackets. Constantly talk for the remainder of its comprehensive range but yet I'd buy any kind of these that individuals tried.Though some of the alternative reviewers will probably disagree, I had put the [URL=http://www.northfacejacketsforsale.net/#1178]north face promo code[/URL] Complimentary Thinker over the Arc'Teryx Sidewinder.