Sheldon on His Mom's First Visit to D.C. 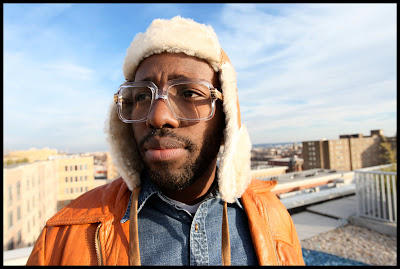 "I grew up in South Carolina. I've been in Washington for nine-and-a-half years. I think that one of the largest motivating factors for me to move to D.C. was spread somewhere between personal and career motivations. You know, I am an openly gay black male and I spent most of my time, up until that point, living in the rural south. I knew that there was a limit to my own personal quality of life and development down there. Unfortunately, that is just the way that life down there is structured. So, I wanted to explore that part of my life in D.C. In terms of career, the pace down there was much slower. Things like actualizing a career take a long time. I was working for an organization where my next move up would have had to depend on the death or retirement of the person above me. I just didn't have the energy to wait for twenty or thirty years for a promotion. On the other hand, it can also be faster down there as people get married and have kids earlier. I'm 33 and most of my friends have kids who are about to enter middle school.
"When I first moved here, I lived in Alexandria, Virginia, and worked as a psychotherapist with sex offenders. Living and being in this area was like a gateway to so many different worlds that I never saw in South Carolina. With time, I saw the writing on the wall that therapy was not the path for me. I did some work in the fashion industry and then started performing and acting while waiting tables. Now, I work at restaurant Marvin. I did my first show in 2007. At that point, I was in between directions in life between activism and performing. The juxtaposition of the two forced me to do my activism through performance. My first show was a one-man performance called Faggot. The show was about my relationship with that word growing up in the south. It was also about how that word can have a potentially deadly impact with the growing level of youth suicide related to sexuality. In 2009, I got back on the performance track and performed a narrative about the two halves of my life: growing up in rural South Carolina looking for a man as a father figure and then moving to D.C. and looking for a man as a partner. For me, it is a very necessary and personal exercise because I wanted to deal with the honesty of my own story so that I could go on and tell the stories of others, no matter how painful it may be. A lot of this story was about my own family and my relationship with my mother.
"My mother only fairly recently came to terms with my sexuality. We had the first conversation about my sexuality in 2001. It was a very challenging conversation for her. She had her ideas of what it meant to be gay. Growing up in the rural south, she had a very narrow view that gay people ended up alone and in institutions. I always tried to encourage my Mom to come up to Washington D.C., and see for herself, but just was never interested. I knew that it was largely because she was not settled with my sexuality.
"But, in 2008, she came to me and said, 'I'm ready.' I had already been up here for eight years and I knew what that meant. My mother is not a very expressive person, but she was ready to see what my life was really about here. She came up here and saw my life and met all my friends: gay, straight, black and white. I really showed her the diversity of this city and of my life. She was so taken aback. She could not stop talking about how much she enjoyed herself in Washington D.C. I think that me being in this place offered her tremendous comfort. Being a therapist, I understand the complexity of parents having to deal with a child who is gay or in any way different than they intended them to be. All parents really want is for their children to be happy. If her understanding of gay life was a very miserable existence, why would she want that for her child? When she came here and saw that was not the case for me, I think she was settled with it. But, she never said anything or asked, it was just understood. A month later on the phone, she asked if I was gay. I said. 'Yeah, absolutely.' At the end of the conversation, she took a big sigh of relief. One of the most comforting things that my mother ever said to me, remember she is not a very expressive person, was, 'You seem to be doing very well in Washington. You are surrounded by a lot of people that really like you. I am happy for you. So, do you have a 'friend'?' That was a really big step for us. She's been back to Washington, D.C. two times since and we talk two-to-three times a day. Now, every time she's here, she wants to spend more and more time with me in Washington."
Posted by - at 9:00 AM

I enjoyed reading this story about you. It was very profound, thought provoking and I feel very honored to be a part of your life here in D.C. Jared Jarod

I loved reading this. I have seen Sheldon at Marvin and it's wonderful to learn more about his life beyond the place. Glad he shared his stories.

They have been getting money gifts clothing tuition etc from these men in exchange for sex on Sugar Daddy-Sugar Baby site SeekingArrangement.com and are prostitutes

These are one of every changing profiles on seekingarrangement.com

Nicole Stevenson
"Nicole" / "Lydia"
121 Laurel Valley Ct
(410) 515-7922
Abingdon, MD 21009
22, College Park, MD / Washington, DC
"Looking for a Generous Daddy"
ABOUT ME
I'm a cute girl looking to have lots of fun. Currently a student looking to go to law school. I love going into the city and trying new restarants and seeing performances. I love dancing, theater, and singing too.
WHAT I'M LOOKING FOR
Looking for a generous sugar daddy who will take this little girl out and spoil her with money and gifts. We can have a lot of fun together:) Show me the money and I'll show you the sugar. I'm worth it - you won't be disappointed. No wannabees or cheapskates!! I expect a significant financial arrangement.

Amelia Gutkoska
"Amelia"
217 Thomas St, Bel Air, MD 21014
(410) 803-1471
22, College Park, MD
"Young lady looking for a little adventure"
ABOUT ME
I'm a junior in college who has grown a little tired of the immaturity of college suitors. I'm very fond of reading and writing. I love dancing and trying new restaurants.
WHAT I'M LOOKING FOR
Someone interested in good company and going out without serious commitment. Let's just have fun!