Michael on Growing Up 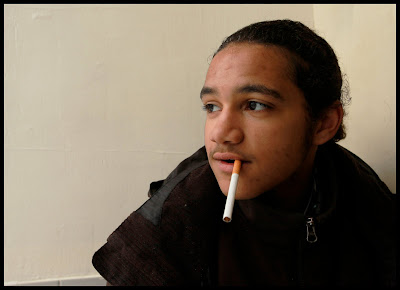 "I was born in Hawaii. I came to D.C. when I was three. I am Hawaiian, Egyptian and white. D.C. is a great place, but a bad place to grow up. I would not recommend it. There is too much gang activity and all that jazz. If you grew up somewhere else, I would suggest moving here. I wouldn't raise children here though. I have younger siblings, but they live in Gaithersburg. My parents and siblings couldn't deal with living here, so they moved. I decided to stay because D.C. is pretty much all I know.
"There was this one time when I was minding my own business and walking up 14th Street and got chased by at least twenty people just because I look like I look. People thought I was in the 18th Street gang. They beat my ass pretty bad. Some of the gangs are territorial. You can't walk in certain neighborhoods if you don't belong to that gang. Most gangs are just people who have known each other for a while and they just established a group. Around Columbia Heights, there are so many gangs. There is MS-13, 18th Street, and a bunch of other groups, most just form to go up against MS-13. I learned all of this on the street. You have to.
"For me, this gang stuff has been going on since middle school. I don't fight because I want to, but because I have to. I try to talk my way out of things before I fight when I can. If you don't mind defending yourself once every month or so, D.C. is a great place to live."
D.C. is home to over 130 gangs. The District has an estimated 2,500 active gang members and 5,000 others who are “loosely affiliated.” Read more about them here.
Posted by - at 9:00 AM