Jan on the Vietnam Memorial 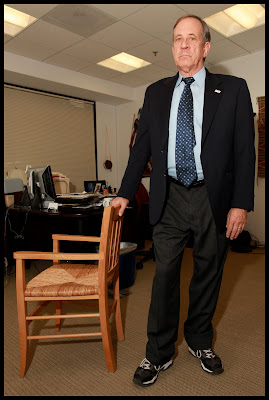 "I was born in Washington, D.C and spent my childhood in Bowie, Maryland. When I got out of high school, I volunteered for the draft. There were certain advantages to the draft at the time. It got your military commitment over with sooner and you could choose the time you went in as opposed to the Army just picking you up. I went in at age 18 and ended up in Vietnam at 19. I was trained as an infantrymen with a speciality in heavy weapons, the 81mm mortar, and a couple of other weapons. My unit was first placed in charge of the defense of Saigon in 1969. There wasn't much enemy activity, so they moved us Northeast to a place called Swan Loc. In May, we had our first encounter with the enemy and I had twelve friends die at the same time. I was there when it happened. High explosives just scatter body parts. I was not prepared for that experience, which took place in January 1970.
"Shortly after that, I was wounded. I was behind a tree and we were firing our rifles. The guys around me got hit. One of the guys panicked and ran. Another guy went after him and left me by myself for ten minutes; it seemed like an eternity. I remember praying and it just seemed to me so unfair that I would have to die after my 19th birthday in this mud hole, next to a tree in the middle of forest, miles from the closest road in Vietnam. I remember praying that I would not die. I survived and felt I owed some kind of payback.
"After the Army, I received my degrees in counseling and psychology. During that time, I worked to better understand post traumatic stress disorder (PTSD) and published a couple of articles and testified in front of the Senate. I became an authority on the subject. PTSD is a normal response to experiencing trauma and violence. One day, I went to see a movie called the Deer Hunter, which was about the war and PTSD. I had thought about building a memorial before, but just decided that I was going to do it after seeing the movie. It became my mission in life. Before the memorial, we had a commemorative stamp and a couple of local memorials. But, by and large, there was nothing tangible to recognize Vietnam.
"For me, the primary purpose of the memorial was to have a place were the veterans of Vietnam would be recognized for the honorable service they rendered for the country. The site near the Lincoln memorial was perfect because of the symbolism. The Lincoln Memorial was built after and because of the Civil War. There was also a deeper meaning to me, which was rooted in the thinking of Carl Jung, who was a student of Sigmund Freud. Jung wrote about the collective psyche we have as a nation. The hope was that displaying the names of the casualties would have a positive healing effect on the nation, as well.
"There was a lot of controversy with the memorial because what is the appropriate monument for the Vietnam War. The rallying cry against us was that this was black and below ground. All of the other monuments were white and above ground. Immediately, people had this image that it was an insult to military service. People said, 'They are hiding it and painting it black.' We were temporarily stopped by Congress from building it. They made us find a compromise with our opponents, which we did with the addition of the three servicemen statue. In November 1982, the Vietnam Memorial was built and dedicated. We had the largest architectural competition in the history of western civilization, which has been recently eclipsed by the competition for the World Trade Center. Maya Lin was the winning design.
"Now, when I go to the memorial, I like to listen to people talk. What I find as an overwhelming comment, and I hear it all the time, is 'Isn't it wonderful that the government built this for these guys'. Everyone thinks the government built the Vietnam Memorial. But, in fact, we did it in spite of the government. We had to raise the money and seek permission from the government to do this.
"The message of this whole thing is that people are capable of doing far more than they think they are capable of doing. If someone has a real passion to do something in life, they should. If you put together the right team, you can accomplish anything."
Jan Scruggs is the Founder and President of the Vietnam Veterans Memorial Fund.
Posted by - at 9:00 AM