Councilmember Jim Graham on What it's All About 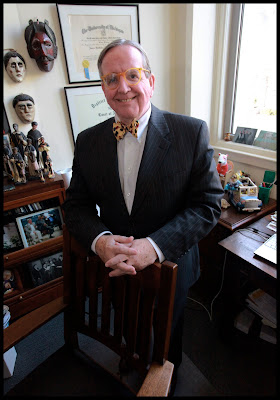 “You’ll not be surprised to hear that I think that I am a good fit as the Ward One Councilmember. Part of that fit is that I really feel that I contribute to the diversity of this ward. I come to the council as an immigrant and a naturalized citizen. My family and I came to this country from Scotland and settled in Hyattsville. What I knew about the U.S. when I was a little boy in Scotland was largely Juicy Fruit gum and of, course, the cowboy movies. I remember coming here after getting off the boat and driving down from New York. The lights were spectacular. I mean, roadways that were lit! We had nothing like that in Scotland. We came very much in pursuit of the great dream of this country. This would be a better life than in, what we called, the old country. Neither of my parents had a high school education. My brother became a Ph.D. and I have a law degree. That happened because of coming here. The great immigrant dream is that education opens the door for opportunity. It surely did for us.
"You know, I’m an example of a little person who was decidedly impacted by a big event. The impact on me was the election of 1980 and its aftermath. In 1980, Reagan was elected. Everyone in my circle expected that Carter was going to lose, but what was astounding was that the U.S. Senate went Republican. Who would have thought that the Republicans would win a majority in the Senate after thirty years of Democratic rule? It was like the sun not rising. While I did still have a good job at the time working with a senator, I felt that I was withering in that work place. So, I started working as a volunteer at the Whitman-Walker Clinic. Those were still the first years of the AIDS epidemic. At the time, having AIDS was basically having a death sentence.
"During those years, you could not be an openly gay person in the Senate. It would have jeopardized your job. Look at how Senator Nunn fired two aides who came out. Even though I was working for a fairly enlightened senator at the time, I don't think it would have been worth the risk for him to support me being an openly gay member of his staff. So, I left my job and, having first been a volunteer, became the Administrator of the Whitman-Walker Clinic. It was very exciting for me because it was an opportunity to do something I really believed in. It was also an opportunity to be myself. From there, I made my run for office.
"Now, the thing that I get the most satisfaction from is how, on a daily basis, I can impact the quality of life for people in this ward. In that regard, it is very much a continuation of the Whitman-Walker Clinic. In Ward One, close to 25 percent of the people live below the poverty line. A lot of people don't know that. These people and their issues are my greatest priority. These are the people who are most in need of government protection. The legislative achievements that I'm most proud of relate to helping those most in need. What it comes down to is that I've always been moved to help people. That's what it's all about.”
Councilmember Graham was first elected to the City Council in 1998. He is the Chairman of the Committee on Public Works and Transportation. He is also a member of the Committee on Aging and Community Affairs, the Committee on Housing and Workforce Development and the Committee on Public Services and Consumer Affairs. Mr. Graham is chairman of the Metro/WMATA board of directors. Learn more about Councilmember Graham here.
Posted by - at 9:00 AM