Ann on Being a Korean Export 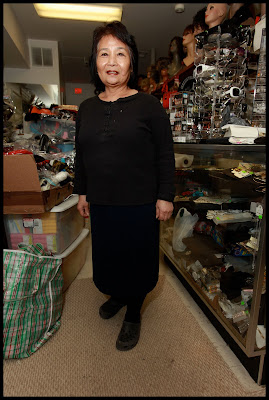 "I came to Washington, D.C. in 1969 from Korea. A U.S. Army soldier married me and brought me here. See, I'm a Korean export! I always tell people that I must have been very beautiful, that's how I left. When I was little, I thought America was a paradise because Americans gave us chocolate and blankets after the war. But there was no way for me to visit America because I was not rich. So, my girlfriend and I decided to date American guys.
"When I met my husband, I spoke very little English and he didn't speak Korean. We just used our hands and said, 'Hi' and other little words. My husband is over six feet and I am under five feet. I said, 'I can't marry you. You are too tall!' I wanted to go to America, but I thought that too much of a height gap was not right. He told me that height didn't mean nothing. My husband is from Washington, D.C. After we married, we moved here.
"I thought America was a paradise when I was in Korea, but it was a big mistake. Koreans are short and tall, poor and rich. In America, you have extra ones. Here, you have color and race problems, too. I said to myself, 'What am I doing here?' I cried for five or ten years. I told my husband, 'There are so many women here. Why did you have to bring me here!?' I missed my food, my language and culture. Back then, there were not that many Koreans here. But now I have adapted and this is my country. I also took on an American name, Ann. Ann was the name of a character from the comics who I liked. People would always mispronounce my Korean name, Sok, and call me 'Sock.' So, I decided to go by Ann.
"In America, my first jobs were working with hair. In Korea, everyone cleans their hair and wants to make it nice. Here, it was totally different. Doing hair was more like doing laundry! One of my friends told me to go and work in a Korean wig shop. In Korea, wigs were used to help people who were old or losing their hair. I think wigs as fashion was really an American thing. Korean people eat a lot of garlic and that is why their hair grows so long and clean. For a long time, Koreans sold their hair to Americans to make wigs. About ten years ago, there was a hair shortage in Korea and places like India and China started selling hair.
"A few years after working at the shop, I opened my own store. At first, we did hair and sold wigs and beauty supplies. Five years later, I started selling homeopathic products because I was using them. They really helped me and I thought I could help my customers by selling them. Now, I have been in this location since September 4, 1995. This wig store paid for my three children to go to college."
Ann's Beauty Supply and Wigs Co. is located at 125 L St. Southeast.
Posted by - at 9:00 AM

Such a great story! Love your blog Mr. Harris