SM on Being the Ultimate Washington Insider 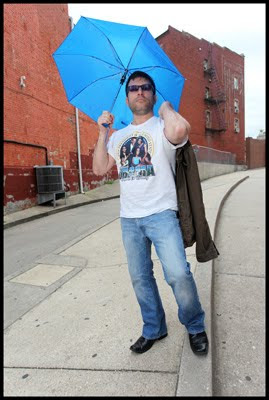 "My name is Scott, but I go by my initials SM now. I used to live in Philadelphia and would come to D.C. a lot. I always had a better time here than I did in Philadelphia, so I chose to move to D.C. in 2006 at the age of 36. Hitting a new town in my late-30's, I really wanted to make it count. I felt like it was my last real go-around to tackle and own a town, or at least my little corner of it. I really wanted to become the ultimate Washington insider.
"The thing is that I work for an ad agency in Georgetown, which is as far as you can get from politics and life on the Hill. But I started writing for the Huffington Post, which got me in a lot of doors. I'm not really sure why, though, because who doesn't write for the Huffington Post these days. Don't tell Arianna I said that! Through that, I got invited to stuff and people thought that I was someone of relevance. So, I pushed my way in to see how far into the interior of big time D.C. I could get. To me, I wanted the same thing that every high school kid wants, to be invited to the right parties, get recognized, and get photographed a lot. This is Hollywood for ugly people and I think that I am ugly enough to make it in this town.

"The thing is that official D.C. is so boring, don't you think? I recognized that I really did not want to be the ultimate Washington wonk. I prefer the Salahi model, I guess, and started to crash parties, like the White House Correspondents dinner, which I did three times. That event is like nerd prom, which made it great for me.
"Recently, I decided to give all of this up and stop living a lie. I came out to everyone that I had not been invited to these events and was just trying to see how far into the city I could get. You know, the Salahis should come join me on this side and be honest about everything. Now, I am happy to be in the same category as those tourists on the top of those double decker tour buses as the ultimate outsiders."
SM Shrake is also a storyteller and performer. You can see his work here.
Posted by - at 9:00 AM

It helps that you looks as smashing in a tux as you do in an Obama family tshirt!

I sit here, dreaming of the day I can be as cool as you SMS. One day, I will be. I just know it!

"This is Hollywood for ugly people and I think that I am ugly enough to make it in this town." - possibly one of the most brilliant things you've ever written, SM, if you did, if fact, write it.

The thing is, you ain't ugly enough to "make it" in this town....which is why you are the Ultimate Washington Outsider.

I appreciate that SM can be open and honest about his social climbing. Too many people here do it, but fail to acknowledge what they are all about. More power to this guy for putting it out there.

SM, will keep an eye out for you on the D List!

First person I've ever heard of that preferred DC to Philly!