Laura on the Jewish Historical Society of Greater Washington 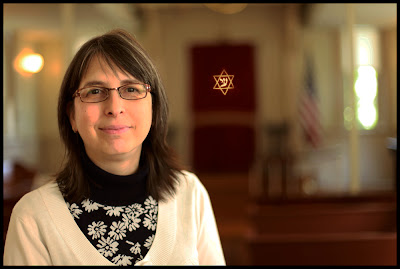 "My family started in the grocery business in D.C. My great-grandfather came here in 1918, just two days after World War I ended. He opened a grocery store in Trinidad. My grandmother was a bookkeeper, and my grandfather sold milk and eggs at the market. My father was always very proud of being born in Washington and his roots here. I grew up with a strong awareness of local history and an attachment to the places and people here.
"I used to work as an international tax lawyer for the IRS. I loved it, but one day when I was walking home, I thought that these multinationals and all of their tax problems are so divorced from everyday life. I always knew that I wanted to do something that was going to make our community a better place. Ever since I was a kid, I was interested in historic buildings, the environment, and creating a sense of place. When I started to volunteer at the Jewish Historical Society of Greater Washington in 1993, things just clicked. A year later, the curator told me that the executive director was going to retire and I should apply. There were a number of people applying and I didn't think that I would get it. But, at the age of 35, I became executive director. Since coming on, I have been working to build a strong sense of pride in our Jewish community and history in Washington and help build bridges to the wider community.
"The Jewish population was always small here compared to other places. The Jewish community started to form in D.C. around the 1840's. By community, I mean 20 families of around 400 Jews who came in through the ports in New York, Boston, and Baltimore. The presence of the government helped lure additional people. Until World War I, we only had about 2,000 Jews in Washington. Later, the number of Jews grew dramatically, as a lot of Jews came here to work for the New Deal or the newly-formed government agencies. Now, Washington has grown into one of the most educated and affluent Jewish communities in the country.
"Jews have lived in all four corners of this city. While there were neighborhood enclaves, there was not one particular Jewish neighborhood in Washington that had all of the Jewish life. Jews largely spread to the thoroughfares, where they could open shops. In NW, it was 7th Street. In SW, it was along 4 1/2 Street, which isn't there anymore because of the urban renewal. Jews were also on H Street, NE, and in Anacostia. These were mostly mom-and-pop stores, but a number of the smaller shops ended up becoming department stores like Lansburgh's, Saks, Hechts, and King's Palace.
"In the 1920's, Jews started to move uptown to Petworth, Shepherd Park, and Silver Spring. As more and more Jews were living uptown, many of the synagogues left downtown - specifically I St between 5th and 8th Streets where there was a synagogue on practically ever corner - for bigger spaces and to be closer to their congregants. In the 1950's, that is when the commercial area on 7th Street started to go into decline. Things got much worse after the riots. After that, people were not coming downtown, as they were afraid. In 1969, many of the remaining Jewish groups, mainly the Jewish Community Center (JCC), the Hebrew Home, and the Jewish Social Service Agency, moved out of the city to Rockville. For them, it may have seemed like the clear choice because the Jewish community was largely uptown.
"Because there has been a real push to make D.C. more of a livable city in recent years, that has helped to reestablish some of the important historical Jewish sites in the city. Who would have dreamt that in 1997, the JCC would buy back their building on 16th and Q Street and there would be a downtown JCC again. Moving forward, I would love to see more of an emphasis on arts and culture in the Jewish community here. You look at places like New York, which has a dedicated Jewish museum, and Toronto, where the Jewish Federation has a vice president for culture. We are working to be able to do those kinds of things for the community here."
Laura Cohen Apelbaum is the executive director of the Jewish Historical Society of Greater Washington.
Posted by - at 9:00 AM

Mazel tov! Some love for the Jews in this city.