Adrian on Living with No Regrets 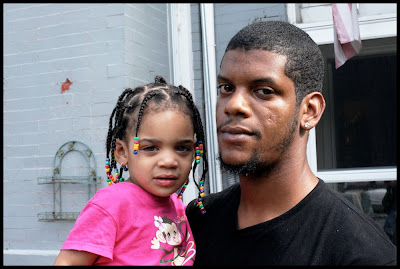 "I am 24 years old and grew up all over this city. I have learned that different parts of the city are, you know, different. We moved a lot because some of the neighborhoods were no good and because I kept getting put out of D.C. public schools. Eventually, I was put out of all of them. If I knew the things I know now, I probably would not have acted as I acted then. I can't change what caused me to do what I done did back then, but I don't live with no regrets.
"A lot of people don't understand that there are a lot of influences and things going on around you that make things, you know, stressful. All of this stuff is gonna affect you one way or another. There ain't nobody who can live on these streets and come away all normal. Sometimes, you fall in or sometimes you might be strong. I guess it depends on the person, but if you are subjected to all this long enough, it is going to get to you.
"After I was put out of school, I went to school in Maryland, but that didn't work out either. My only option to not be a failure in life was to go to Job Corps. I told my mother that I was going and wanted to do something with my life. She didn't make me go or nothing, I did it because I knew that it was the only option that I had left. I went to job corps in West Virginia and got my high school diploma and a learned business technology. They trained me to use Microsoft Office. The program was supposed to take two years, but I finished in six months. The stuff they were teaching, I already knew. See, I may have been put out of the schools here, but I ain't stupid. I got this stuff.
"I have a two year old daughter and I want her to go to college and do the things I was never able to do. I am still a young guy and ain't finished doing what I want to do, but feel like I missed out on a lot because how I was when I was younger. Ultimately, I want to get my degree in engineering, or something like that, and get certified in scuba diving. In high school, I got certified in a swimming pool and we were supposed to go out into the open water to get certified, but I got put out before that. I really miss it. I still love the water, and that was one of the things that  they could never take away from me. Now, I work on the Odyssey, that cruise ship down on the waterfront. They give tours of the city and go over to Virginia. I am a deck hand and part of the marine crew. It is a nice way to stay close to the water. That's pretty much about all I got to say."
Adrian is pictured with his daughter Kierra.

Adrian, as someone with an engineering degree and SCUBA certification (both of which are somewhat underutilized), you've made me realize how much I've taken such things for granted. I sincerely hope you succeed in giving your adorable daughter everything you dream of for her.

Thank you, Adrian. It was my great pleasure. I wish you and Kierra all the best.