Ajaé on Her Wish for D.C. 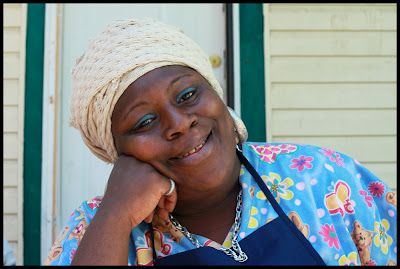 "I am 32 and was born in SE, Washington, D.C. The city changed a whole-whole-whole-whole-lot since I've been around. I have seen SE fall and grow. I have seen the projects change and people move in-and-out of neighborhoods. Things were torn down and condemned and they brought in a lot of new stuff. They say it is for the better, but I am not certain. In the political aspect, yes,it is better, but for the city people, no.
"I want peace, tranquility and kindness in my neighborhood and for the city. I mean, a lot of stuff has calmed down. SE used to have a high rate for killings. Years ago, we wouldn't even be able to sit out here and have this conversation, but now the streets are safer. I am proud of the change here. Still, there is a lot stereotyping that they give SE, but there is also a lot that comes out of here. I contribute to the city by doing sexual outreach, things like handing out condoms to the community. That's how I try and make this place better.
"Now, I do home health care work. I work with seniors, people with disabilities, or people who just need a home nurse. I went to several trade schools to get certified and I was impacted by Marion Barry's summer jobs program when I was 14 to 21. That program gave me something to do and helped my job training skills at an early age. As a teenager, you can't always depend on your parents, so it was also nice to have money in your pocket.
"Of course, Marion Barry is the longest serving mayor in D.C. He is well loved in the SE community because he did a lot and brought a lot to our communities. In terms of this new mayor, Adrian Fenty, he hasn't really stepped up to the plate. It may be because everyone is looking for another Marion Barry, but there will never be another Marion Barry. If I had a wish, I would bring him back. I don't see it happening again because he has a lot of controversy behind him, but I think that you will get a lot of positive feedback from the people in SE if he does."
Posted by - at 9:00 AM

I have lived in this city my whole life and still do not understand the obsession with Marion Barry. Even if the man were convicted of murder, I am sure his approval ratings in parts of D.C. would not change. What am I missing here?

Marion Barry never forgot where he came from or who got him into office. No matter what people say about him, many people across the city, especially in SE, were impacted by one of his programs or initiatives. You just need cross the river to see who the mayor for life is...

Congrats on the NPR piece today!