Roxanne on a City Full of Life 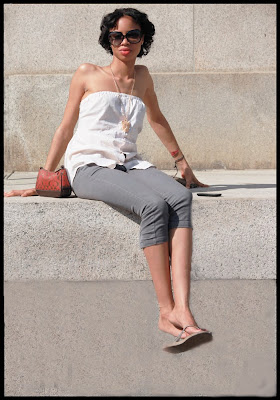 "I was born in Washington, D.C. at the Washington Hospital Center. I was raised in Petworth, but then moved all over the country to live with family. I have lived in New Mexico, California, Vermont, Cincinnati, and Atlanta. I came back to D.C. in 2001.

"When I left, I brought the music of D.C. with me. There is a genre of music here called go-go. We were always talking about and listening to go-go at home. It took me leaving the city to realize that this was a style of music particular to D.C. When I was living in other cities, I would request go-go on the radio or at the skating rink, but people didn't know what I was talking about. Outside of that, I liked living all over the place. It exposed me to so many different people and places.

"When I finally came back to D.C., I noticed that gentrification had just started in Petworth. I was worried because I saw that my neighborhood was changing and my friends and family were moving out. But the gentrification also presented new opportunities for the community and a chance for me to meet new people. In a way, gentrification brought the whole country to me, which was nice for me after having lived in so many different places all of my life. I ended up meeting people who came from all of the places I had lived in growing up. So, I realized that the changes were not that bad because it created more diverse neighborhoods and a more exciting city.

"There is still so much of D.C. that I want to see. I told myself that I would try and go somewhere new every weekend. I usually just get up and go wherever my feet take me. While I sometimes feel like I can have a love-hate relationship with this town because it can feel very small at times and because of the violence in the neighborhoods, I will always love the life in the city. Everyone here, including the panhandlers on the corner, are so full of life and doing something interesting."

Nice to see the word gentrification used without so many negative connotations. I agree, gentrification can open a neighborhood to many other worlds.

I really like this interview. Gentrification is not all bad either, but tends to bring in people scared of dc residents ;}

you can never go home again.