Councilmember Kwame Brown on Changing with the District 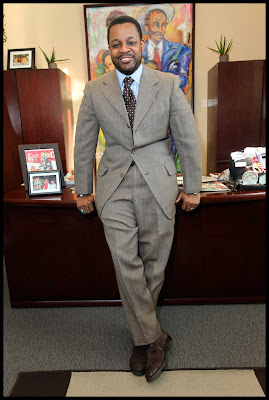 "My Dad came here in the 1960's. He was always involved in D.C. politics from being a part of the civil rights movement to helping Marion Barry get elected to running for school board in 1986. He was always talking about how to change things in D.C. My Mom's family is from the Alexandria area. She is an ordained minister and very religious. She didn't start wearing pants until I was 36. My parents are two very different people who exposed me to very different parts of this city.
"During my career, I worked for the private sector and for President Clinton. After that, I really wanted to work to make a difference in D.C. I decided that instead of talking about the problems here, I was going to run for office. People said, 'You are crazy and can not win.' There had never been a graduate from the Mayor's Youth Leadership Program who was elected to City Council. No one east of the Anacostia had ever won an At-Large seat. And my name is Kwame, which some people thought was a problem. They wanted me to run as just 'Brown.' Add to that running against a 16 year incumbent. Once I started to run, I knew that losing was not an option. I wanted to show that you could be a graduate of D.C. public schools and live east of the river and participate in changing in this city. I proved that.
"Now, I feel strongly that it is time for young people to take over the world. I am all for respecting our elder statesmen, but we need to beat a new path to the future. There is always some battle between me and my old man over approaches on how to get there. The old guard is driving and looking out of the rearview mirror. We need our younger generation, who is forward thinking, to get in the left lane and pass the older generation. You see that happening with things like same sex marriage. That never would have happened back in the day. You also see the younger generation holding up economics as a leading factor to make lasting change in this city.
"If you go back from the 60's to now in the District, we were really interested in attacking the social issues, Now, I believe, it is economic issues that should drive us forward. We need to ensure that the city is economically strong. You can't change the social issues without economics. The best way to get people off of welfare or into affordable housing is through economics. We need to build the new generation and give them skills so they can get jobs and succeed. We used to have seven vocational schools in D.C. We got rid of all of them and said we would get everyone into college. You and I know that we can't do that. That just led to a generation of people graduating from high school with no technical skills. That's why I worked to re-open the Phelps Career High School. so people could leave with technical skills. We had zero people being trained in 2009. Now, we have 145 people trained annually.
"In addition, you have so many kids who were failed by this city in the 80's. Now, there are too many grandparents raising their grandchildren. We need parents to raise their kids. We see the impact of a generation of people who got caught up in drugs, incarceration, and broken homes. The question becomes how do we deal with this. We can't socially spend our way out of this, we need economics to help people get jobs and ensure that we have mixed-use and mixed-income developments where these people can live. You used to be able to meet someone in D.C., fall in love and raise your kids here. It is not like that anymore. It's no longer the affordable, family friendly city I remember.
"Every day, I am up here, I realize that it is not about what I want, but about how to help people, especially the young people. I want to help create the next generation of entrepreneurs, politicians, doctors, and lawyers. The younger generation here needs to kick down the door and take it because no one is going to give it to us. The District has changed and we need to change with it."
Councilmember Brown was first elected to the City Council in 2005. He is the Chairman of the Committee on Economic Development. He is also a member of the Committee on Government Operations and the Environment, Libraries, Parks and Recreation, Finance and Revenue, and Public Works and Transportation. Learn more about Councilmember Brown here.
Posted by - at 9:00 AM

Kwame, when are you running for Mayor?