Jen on Moms on the Hill 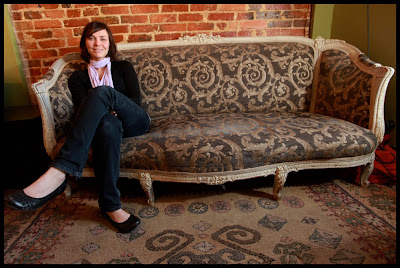 "I grew up in Staten Island and then did high school in New Jersey. There is certainly a lot I miss about those places, but there is something really special about living in D.C., especially around the Hill. I find the people here really passionate and informed. I came to D.C. with my husband, then boyfriend, in 1995. We met in college and came here for his graduate school. I didn't think we'd be very long, but now I can't see living anywhere else.
"During our 20's, we lived in Columbia Heights before it was cool and had a metro. I did a variety of weird jobs, like working as a puppeteer. It was fun to tell people here that I was a puppeteer, as everyone works for the government or a non-profit. When we were pregnant with our first child in 1999, we moved to the Hill, near H St. Northeast. Just by chance, someone saw our current house and told us about it. We moved a block off of H St. and have seen the neighborhood change. It is amazing to see that there are now restaurants and bars, many of which are kid friendly close by.
"After we moved here, I gradually met other moms in the neighborhood. We started having a regular playground and this group of friends was the original Moms on the Hill (MOTH) group. One of the Mom's started a yahoo group because her husband was tired of having his inbox clogged. With time, the site grew and we all invited new Moms we met to join the group. In September 2001, I wrote an article for the Hill Rag about being a Mom on the Hill and MOTH. After that, the group got bigger and bigger and now we have over 3000 people in our group.
"I always say that MOTH is a combination of old fashioned neighborliness and the Internet. One of my favorite things that we do is meals on wheels. Yes, we stole the name. Every time someone has a baby, we get people in the neighborhood to volunteer and cook them dinner. It is really nice to bring food to someone, especially to parents of a new baby. It is such a kind gesture that is so greatly appreciated. We're not used to accepting kindness from a stranger anymore, but it is a really wonderful way of helping the parents of newborns.
"We don't have a public site and we are not a non-profit. We keep an informal email group because it allows people to do what they want with it. Because it is so informal, it keeps the energy of the site up. A group of people met through MOTH and started Two Rivers Charter School. After that, a lot of people started to develop an interest in the local public schools. There has been a resurgence in a lot of the elementary schools and that is due in some part to these families having the ability to connect through MOTH. Everyone who leaves the area says that there is nothing like MOTH in other neighborhoods or cities. There are other listserves and websites, but there is something really special about this community here."
Posted by - at 9:00 AM

Ah, the wonderful power of Moms!

What is so unique about the Hill? I don't get it. Parents all over the city are organizing to open schools and make things better for their kids.

Tom, you just need to come over to the Hill to see the amazing community of people over here. There is no science to it, just a lot of caring and devoted folks.

I just moved to PG co from Indiana, and we had a similar group back in IN. I miss it so much - I always had someone to ask about dentists, where to find rye flour or what events were coming up. Good for you - I'm sure you already know what a great thing you have!