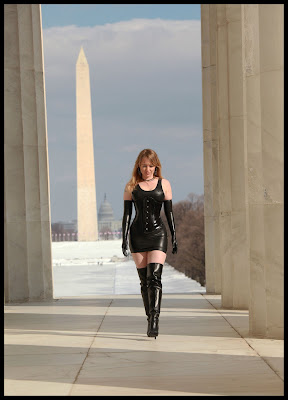 "When people don't accept who they are on whatever level, whether sexual, social or personal, they can do a lot of damage to themselves because of how unhappy they are. I just want every father, mother, daughter, and lover out there to be able to know who they are and honestly communicate that to their partner, whether it is vanilla sex or extreme kink. If someone is coming to me to induce a feeling of shame because they don't feel comfortable with what they desire, they need to seek a psychotherapist, not me. I only want to play with people who are comfortable with their desires and embrace their identity. I screen people using extreme intuition and patterns. When you are in the business long enough, you learn who the wankers are and you can point them out in ten seconds.

"People come to me to do all kinds of scenes that include things like rope bondage, impact play, which is everything from spanking with a hand or a paddle to flogging and hitting, and cross-dressing, which is my bread and butter. There is so much cross-dressing out there. You would have no idea because someone can just wear panties to work under their trousers. I love edge play, which is the scary, psychological stuff when you get inside somebody’s head and play with their fears. It builds up someone’s confidence. As for rope bondage, I was into rope before I knew about this scene. A pile of rope makes me smile. I think it takes me back to my farm days.

"I also do traditional slave play and service. Some people are really fulfilled and satisfied by coming and cleaning my house and knowing that I appreciate them. It sounds a little unbelievable to those that haven't experienced it, but it is very sincere. Now I have one boy who is 27 and Jewish and has served me for two years. I also have my little Indian boy. He is 22 and has been with me for a couple of months now. I would love to find a girl, too.

"Being a preacher’s daughter and a Dominatrix, I can see things that other people can’t see in people, including their power. Power is real, and these people in D.C. pack a lot of it. What these people are giving up to me - their will, their intellects, their bodies, their desires, their pocketbooks - are larger and stronger than anywhere in the world. This is the perfect city for what I do. These are important individuals who have a lot of people that rely on them. They spend all day making heavy decisions. When they come to visit me, my ropes set them free. The smallest consideration for the submissive inside of them is enough to empower them to go out and work hard for another three to four weeks. I'm like a therapist, a life coach, a best friend, a Momma who is gonna tell it to you straight. Generally, if they maintain a professional relationship with me, they are also better husbands and partners when they go home.

"I hope to meet someone and settle down someday, as I was disowned by my family. That person has to be very emotionally secure and intellectually sophisticated. When I am out at a bar, I tell people that I am a consultant who works with the military. But when I'm trying to get to know somebody, I usually put it out there pretty quickly. Occasionally, I have a lover of my own who is not freaked out by what I do for a living. A lot of people think I'm a prostitute. All I want to say is that this is so much work with the equipment, the overhead, the cleaning, the supplies, and the sanitation. If I had wanted to take the easy way, I would have done that a long time ago. I pay thousands of dollars every year to attend seminars, where I build my skills. Give me credit."
Read more about Mistress Domina Vontana here. Learn more about the BDSM community in D.C. from Black Rose and DCTNG.
Posted by - at 9:00 AM

I can only imagine the kind of clients she has in this town!

Ironically my father's birthday is this week. Thanks for the present Danny.

Any shot you will move back to Montana soon and live in the barn with the animals again?

your words show strong belief in who you are and what you do. Your attitude support a community that is not well understood and you have the courage to face the many critics. There is generosity in your effort to educate others. Your inner beauty matches your gorgeous look. Great pic!

I've been to DC Bound a couple of times, and other than enjoying seeing hot girls tied up, I honestly don't get it. Thanks for helping me understand a bit more.

This kind of mulch s also more natural looking than other
mulch choices out there for the delicate look of flower gardens.
If you are working on a riding mower or a mower
with an electric starter, you will also want to disconnect the battery as to prevent any accidental startups while servicing your machine.
When ordering mulch, find out what the delivery cost is and compare it between companies before ordering.


Here is my blog mulching

Still the health concerns mar the overall positive sides of this economic growth as people take their health problems
as the cost of development which is indeed pretty higher.
Eating white sesame seeds in the morning, take alfalfa juice mixed
with carrot juice and lettuce or third cup of aloe vera juice
every day are very good natural remedies. Black hair
has a distinctive composition that makes it sensitive to breakage.

However, this solution is chemical free and some people find natural products more appealing.
5 ml Kalonji Oil mixed at a hot drink after supper gives a quiet sleep all during the night.

﻿An payday advances appraiser was sent to search at my household.

The income out figure transformed because of troubles using the appraisal corporation, and there
was cash loans online an additional problem.
Settled in ten days in the settlement table, my http://www.linguanor.net/user/view.php?id=99359&course=1 was sold to Countrywide before
I signed a form, which I confirmed my mortgage loan advisor I did not need to
deal with. I feel I was misled all of the way by the process.

Now, few enterprise days soon after settlement, I nevertheless don’t have
my cash out, which I was advised would be direct deposited immediately after 72 hours.
I discover that payday day loans has not but wired the cash to your settlement enterprise for my cash out, taxes or insurance coverage.

So there are many virtual airlines that you
can choose from and be their management. While the
leader is placing protection and clipping the rope through, the second climber
is removing previously placed protection. After February 27, The Sim Online
servers were shut down and it is now known as EA land, old account holders can still come
back of course, and its the same game. However, if you'd like to take the scenic route through Google Earth, the SR22 is a better choice. If you want to manage your own virtual airline then you need to visit the main Sim - Miles website and complete a virtual airline application form.