Dan on Seeing Washington from a Piano Bench 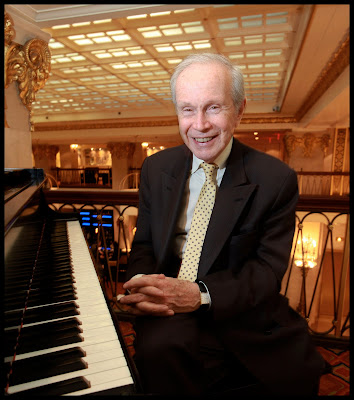 “I was born in Buffalo, New York in 1935. Of course, I’ve been lying about my age and telling people that I am 38…Celsius. Those were some tough times. We're talking the Depression, now. My father had a job pumping gas. He used to wear a leather bow tie to work. Can you imagine that? I tell you, he was just lucky to have a job. To have babies during that time when you didn’t know what you were getting into was a big deal. But we laughed a lot and played music as a way to keep things positive in our family. One of my father's great passions was the piano and now me and my brother are pianists.
"My parents would have their friends come over and we would perform for them. If we were naughty, they would send us to bed without applause. Even now, we still put on the same act. It hasn’t changed at all. I got my break when we moved to Miami. At the time, the coaxial cable had not come down from New York, so the only way you could get television programs was by mailing them on kinescope from the studios. So, Florida was always a week behind in television. That gave a great break to kids who had a lot of moxie to be local entertainers. At the time, I had my own radio and TV shows and a column in the paper. I even played in Miami Beach at the famous Sagamore Lounge of the Sagamore Hotel. Get this, we would do punch lines in Yiddish and we didn’t know what we were saying. Then, I got a national commercial for cigarettes, which was a huge deal. I look back now and that was crazy, as cigarettes killed everyone in my family.
"I always thought that I was going to be an actor. Music was very easy to me, so I didn’t respect it. I moved to D.C. to go to Catholic University and stayed for many years after as an actor. We were doing a scene from Henry IV, Part 1 at the Mayflower Hotel the same night the French singer Edtih Piaf was performing at the hotel. Her piano player didn’t show up, so they asked us if anyone knew how to play French music. Of course in show business, when anyone asks you if you do something, you say. 'Yes!' That was how I got my start at the Mayflower Hotel back in the Eisenhower Administration. That’s how long I’ve been here.
"People call the Mayflower Washington’s second best address after 1600 Pennsylvania Avenue. All of the President’s have stayed here. We have all of the Inaugural galas. There is a lot of history here. Listen to this true story, the hotel used to have a strolling fiddle player named Julian Altman. He got sick at 85 and on his deathbed, he tells his wife, 'This fiddle is pretty important.' Turns out it was a Stradivarius that had been stolen out of a dressing room of Carnegie Hall. I don’t think he stole it, but it's an amazing story.
"Now, I work at lunch at the Prime Rib and evenings at the Mayflower.  Both places get the same kind of  lobbyist and Congressmen crowd. You can always tell the difference when they’re at dinner because the lobbyists picks up the check. When I play, I look at people and think about what was popular when they were 18. That is the key. I also get a lot of requests. Guys usually want As Time Goes by from Casablanca. Women always like Memory from Cats. Late in the evening, after people have had a few, they usually come and sit on the bench with me, crying about how they wish they had practiced piano when they were little. I tell you, I've really seen a lot from this bench."
Catch Dan Ruskin playing lunch daily at the Prime Rib (2020 K St. NW) and in the evenings at the Mayflower Hotel  (1127 Connecticut Ave. NW.)  Listen to one of his original tracks here.

What a great story! I'm going to have to go hear Dan play sometime so I can tell him how much I enjoyed reading this.