Lloyd on Washington's Other Monuments 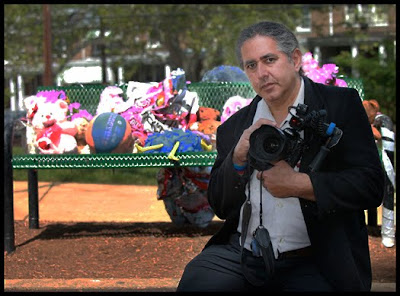 "I was born in Dayton, Ohio. My Dad was an aircraft engineer at the Wright-Patterson Air Force base. He eventually got a job on some new thing called computers and we moved around a bit before settling in the D.C. area in 1965.
"By hit or miss, I became a photographer while in college in Connecticut. When I came back to the area, my work was taking me all over the city and I started seeing these shrines to people who were killed on the streets. To me, it was like watching someone’s heart bleed in public. There is a huge amount of emotional content in them. They are homemade folk art and very specific to D.C. From my relatively small research, there have been shrines recorded back to the early Middle Ages in Europe. The instinct to build shrines varies from place to place, but they are immediately recognizable no matter where you are.
"I started photographing the shrines seven years ago. I have been to over 500 and documented over 200 of them. Many of them are very modest, just some police tape and a teddy bear, but others are huge. I have seen panties and condoms, but typically it is plush toys, balloons, and liquor bottles. I think that a lot of these items represent someone's hope for the deceased and for the community. Maybe it is a hope for a better, safer, and heavenly place for the deceased and a call against violence in the community.
"When newspapers were strong, you could find information about every shooting in the Washington Post. Now, someone getting shot doesn’t make the paper. Three or four people have to get shot before that becomes news. I still drive around looking for the shrines and also use the area police resources to keep up with what is happening. I think that I have been to almost every shrine in the area since I started. I do not document the vigils out of respect for the families, but I take photos of the shrines to capture crime’s aftermaths and how it affects people. I am interested in documenting and sharing the healing aspects of shrines and how people try and rebuild themselves using this folk art.
"Doing this is part of my own way of keeping my priorities straight. I think that our job in life, if we have a job, is to learn and enlarge the consciousness of ourselves and others. I do this with no support, but because it is the right thing to do. I would like to bring this work into a public awareness program and to people who can make use of it, like survivors of street violence.
"As one guy said to me at one of the shrines, 'No matter how bad you are, no one deserves this.' When someone is murdered, you don’t just kill a person. You are also killing their entire family. Life is a short, complicated, and mysterious gift. Some lives end too soon. I can’t imagine ending this work unless the murders disappear in this city."
Read more about Lloyd Wolf's work here.
Posted by - at 9:00 AM

Sometimes i feel like this blog talks about a different city than what I see everyday in my Logan Circle/Dupont Circle world. In all honesty, I don't think that I will ever go and see that side of D.C., but I am happy to read and learn more about it here.

Carla, I appreciate your honestly, but why are you too good or not open minded enough to leave your bubble and come and see the 'real' city. Tens of thousands of people live, work, and raise their children here everyday. Most do so safely and happily. DC is not all NW, lattes, yoga and Whole Foods...

Carla, street violence can happen anywhere in the city. Read just the first page of Mr. Wright's blog-- out of the six murders documented there, you'll learn that two of them took place in suburban, white collar areas (Silver Spring, Fairfax County) and one of the victims lived in yuppieville Arlington. You're fooling yourself if you think you've isolated yourself from street violence by staying in Logan/Dupont circle. Why not get out and explore the rest of the city, as Shavaune suggested? You'll gain a much richer experience from learning about DC's other three quadrants firsthand than you would from reading about them in a blog.