Shahid on the Guerrilla Poetry Insurgency 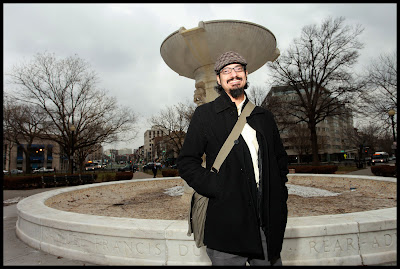 "I was born in England and my family moved to rural Missouri when I was two. We lived there until I was ten and then moved to the suburbs. I went off to Chicago for college at 16 and stayed there for ten years. I spent a lot of my time there down-and-out. My parents lost their house. I had to leave school and couldn’t really hold down a job or an apartment. That time in my life was very disempowering. Starting law school was the first time I really felt hyper-empowered. It’s an amazing transformation to go from feeling like a passive observer to being an active participant in the world around you.
"After law school in California, I moved to D.C. in 2003. I’d been organizing anti-war resistance on the west coast and wanted to take it east to D.C. I came here with a fancy-shmancy law firm job and immediately began organizing street demonstrations. I felt like there was a lot of possibility here professionally, but what rooted me here was the artistic community. Once I got exposed to the local counter culture, I really developed a sense of hope about this city. A lot of people come here from all over the world, inspired to work on all kinds of different causes. If any place reflects a collective action dilemma, it is those of us in the “non-profit industrial complex”: we’re all zoomed in on our respective issues, so a movement uniting those causes gets ignored.
“For me, art has been a way to pull people out of that insularity and draw them together. After co-founding some artist collectives on the west coast, at Stanford in 2002 and then SF in 2003, we started the DC Guerrilla Poetry Insurgency in Dupont Circle in September 2003 as a way to bring people together. It’s political theater and an arena for people to speak their visions creatively. What we do is sort of like spam marketing: we are going to bring issues to you, whether about troop deaths or climate change, whether you want to hear it or not. Maybe you won’t listen to a talking head, or read a paper, but you’ll listen to perspective if there’s a beat behind it or if it’s poetic.
"At our events, we see the full range of responses, from right-wing types who heckle us, to people who stand thoughtfully and listen. My favorite interaction is when someone walking by randomly grows moved to take the mic and share something on their mind, or pick up a drum and play. We want to collapse the distinction between audience and participant, which is maybe the biggest lesson I took away from my years at Burning Man. Sometimes, a few of us guerrilla poets take the Poetry Insurgency on the METRO, spitting revolutionary rhymes or doing call-and-response chants. You see different attitudes on different train lines: on the blue and orange lines heading into Virginia, people are usually very cold and just try to ignore you. On the red line, you have a 50/50 split, where some people will engage you and others will look away. But the green line rocks! We’ve even been asked not to leave the train – it’s amazing.
"People say that 'the antidote to despair is action,' and that seeing the momentum of a social movement can inspire more energy. Art gives a chance to get back to the basic principles that get lost a lot of the time in policy discussions. I think that what drives people to this town is not the minutiae, but the grand vision that they carry with them from whenever they came. It’s important for people, especially here in our seat of government, to recognize the opportunities we each have as individuals to speak our minds and get back to that vision."
See some of Shahid's poetry here.
Posted by - at 9:00 AM