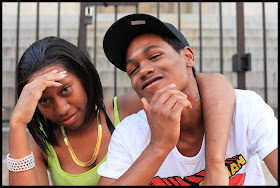 Asyhia - "First time I heard Go Go...man, my favorite song was Overnight Scenario. Heard It outside, someone was playing it out the car radio. People were dancing. It was the first Go Go I went to, first band I ever seen – forgot the band, but it was Overnight Scenario. Last show I saw was TCB, TOB, all of the them. Saw them at the Show Place."

Wo Wo - "And Go Go Music. The first time I heard Go Go music…I love Go Go music...it’s the best. The emotion and all that, the crowd, the movement it gets you hyped and stuff like that. Yes, that’s the best thing that ever happened to me in DC. I heard Backyard Band, it's called The Thong Song. That’s the first song I ever heard. That’s my favorite song. Want me to sing it?"

Listen to Go Go and find out about upcoming shows here. Also, you may know the Backyard Band's singer Anwan Glover as Slim Charles from The Wire.

Please use a username rather than "Anonymous" when stating your mind.